After the Indian mission in Canada flagged the vandalisation of a sign at a park named after Bhagavad Gita, the Canadian authorities denied the act was mischievous.

Dubbing it a ‘hate crime’, the High Commission of India in Ottawa wrote on Sunday (2 October), “We condemn the hate crime at the Shri Bhagavad Gita Park in Brampton. We urge Canadian authorities and Peel Police to investigate and take prompt action on the perpetrators.”

Earlier known as Troyers park, it was renamed as Shri Bhagavad Gita park and unveiled on 28 September in Brampton city, Ontario.

Brampton Mayor Patrick Brown took to Twitter to issue a clarification and said the blank sign was left during the repair work. “Following yesterday’s reports of vandalism of the recently unveiled Shri Bhagavad Gita Park, we took swift action to investigate further. We learned that the reported blank sign was installed by the builder as a placeholder until the permanent Shri Bhagavad Gita Park sign can be replaced tomorrow,” he tweeted on Sunday.

“The blank sign was left up during repairs. This is not a usual process as we never remove a sign unless damaged or its name changes,” he wrote in another tweet.

“The blank sign was left up during repairs. This is not usual process as we never remove a sign unless damaged or its name changes.”

Brown had earlier condemned the alleged vandalism, saying “we have zero tolerance for this”. However, he later deleted the tweet and shared the clarification by Brampton’s Parks Department.

Earlier in September, a prominent Hindu temple was reportedly defaced with anti-India graffiti in an apparent ‘hate crime’.

On 23 September, the Ministry of External Affairs (MEA) issued an advisory to its nationals visiting Canada to remain vigilant citing a “sharp increase in hate crimes, sectarian violence and anti-India activities”.

Here we will look at recent incidents of crime against Indians in Canada.

A man, identified as Ravi Duhra, was a victim of racism in Canada’s Abbotsford in October 2016. A white man yelled racial slurs at Duhra, telling him to “go back to ****ing India” during an altercation over parking violations, reported India Today.

In July 2018, an Indian-origin couple was harassed by a ‘racist’ white man who told them to ‘go back to your country’ and threatened to ‘kill’ their children during a scuffle over a parking lot at the Walmart Supercentre in Hamilton, Ontario.

Violence broke out during the ‘Tiranga and Maple’ car rally organised by the Indian diaspora in Brampton on 28 February 2021. Nearly 350 cars participated in the rally to celebrate the arrival of India-made COVID-19 vaccines in Canada. However, pro-Khalistan supporters disrupted the rally and abused the participants, reports South Asia Monitor. 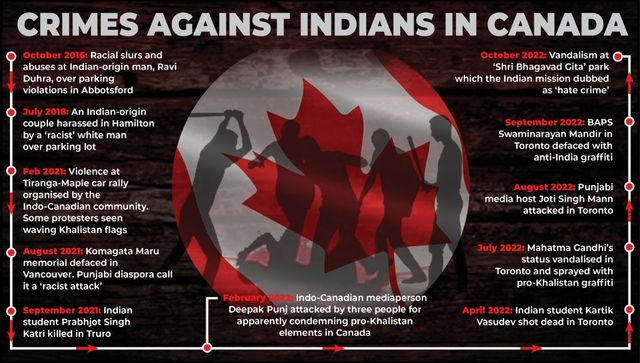 Canada has seen a spurt in crimes against Indians in the recent past. Graphic: Pranay Bhardwaj

“On Sunday, 28 February 2021, at approximately 4:00 pm, the victim, a 40-year-old woman from Brampton, was in the area of Mississauga Road and Queen Street with her husband driving in a rally. During this time, a man stepped in front of the vehicle. The victim exited her vehicle, there was an altercation, and she was assaulted. She did not sustain any injuries,” a police statement said, as per Hindustan Times (HT).

A 27-year-old man was arrested and charged with assault for the incident in March 2021, HT reported.

In September 2021, Prabhjot Singh Katri, a 23-year-old Indian student, was murdered at an apartment in Truro town in a suspected case of hate crime.

Katri worked for a taxi service company and some restaurants in Truro. He had come to Canada from India in 2017 for higher education. Three men were charged in connection with the murder.

In February 2022, Deepak Punj, host of Frontline Radio, was attacked when he was trying to enter his studio building. A day before the assault, he had denounced the display of Khalistan flags and anti-India slogans during a vigil in Brampton, a GTA town.

“They asked me if I did a show on this topic, and then attacked me,” he told HT.

Kartik Vasudev, a 21-year-old Indian student, was shot dead by 39-year-old Richard Jonathan Edwin in Toronto in April this year.

“Kartik was just outside the Sherbourne subway station last Thursday when he was approached by a stranger…Unprovoked, this man shot Kartik multiple times, killing him,” Toronto Police Service chief James Ramer was quoted as saying by PTI. Kartik, who hailed from Uttar Pradesh’s Ghaziabad, had moved to Canada in January for studies.

Mann, a radio host and real estate agent, was beaten by the assailants, in his driveway in the town of Brampton in the Greater Toronto Area (GTA). The attackers also broke the windows of Mann’s vehicle with a small axe, reported Hindustan Times.

As per CTV News, the police believed Mann was the victim of a “targeted attack”.

The historic Komagata Maru memorial located at Coal Harbour in Vancouver was defaced with white paint in August 2021. The Punjabi diaspora termed it a “racist attack”, as per TheWire.

Yuniar Kurniawan was accused of defacing the memorial.

In July 2022, a statue of Mahatma Gandhi located at the Vishnu Mandir in Richmond Hill in the Greater Toronto Area (GTA) was vandalised. An Indian official told Hindustan Times that pro-Khalistani slogans on the statue may have been sprayed to create disharmony between Hindus and Sikhs in Canada.

The BAPS Swaminarayan Mandir was defaced with anti-India graffiti, which a Canadian MP blamed on ‘Khalistani extremists’. BAPS Swaminarayan Mandir was defaced with anti-India graffiti in Canada in September this year. ANI

Read all the latest news and updated news

Disney on Ice is returning to Toronto with Moana, Rapunzel, and Elsa

Canada became the HQ of the Khalistan Terrorist...

Immigrants in Deep Fear In Canada?